Above is the statue of Louise Henriette of Orange-Nassau: the namesake of the town, Oranienburg. She was a strong woman who had a large role in government and developed the first orphanage in Germany. She is a special figure for the town, but sadly this is not what marks Oranienburg on the maps. It has a different darker identity. The first Nazi concentration camp was built here in 1933, north of Berlin, and later it developed into the Sachsenhausen concentration camp. In many ways these concentration camps can also be viewed as cemeteries… but not the kind I wish to spend a lot of time in. However, remembering is the only way to never let anything happen like it again and that is why it is important to keep these places preserved.

cobblestones in the streets of oranienburg with the names of Jews killed in the Holocaust. These stones can be found all over Germany and are markers for people that never received a proper grave stone. 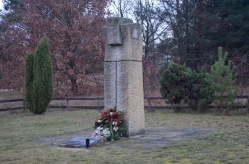 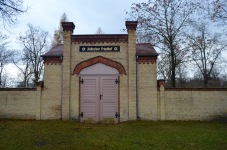