In this small town of La Emilia at the north of Buenos Aires Province, who knew I would see the most impressive choreographed amateur large group dances of my life?

La Emilia is a very small town of around 8,000 people where everyone seems to know everyone. Most residents of the town are a part of a social/sports club that is right next to the small factory where many people here work. During the summer (January and February) the social club arranges an Olympics for the town dividing everyone from small children to grandparents into four teams of red, green, yellow, and blue. Through out the summer these teams compete in basketball, swimming, soccer, volleyball, a 5k race, a costume contest, a singing competition and more! The final competition is a large dance performance. Each team picks a theme and this year it was bank robbers, the jungle, aliens, and a Chinese dragon. These routines included confetti guns, corresponding background videos, custom costumes and makeup, a balloon release, someone jumping off a balcony, someone twirling from a hanging rope, tumblers, glow sticks, a large scale cardboard police car, and a final message with a letter signs.

The craziest thing about this event is was that it started at 10:30 pm with a contemporary dance showcase and lasted until 4 o’clock in the morning, when the winners were announced. When the third team went on stage at 2 am I was drifting in and out of sleep, sitting in a lawn chair at the top balcony of the gym, but I don’t know how that was even possible with the flashing lights and techno music. I have confirmed that people in Argentina don’t sleep.

In a small town this club is an essential part of the community for many reasons. The kids in the town are always busy with sports and therefore physical activity is an enjoyable (and healthy) past time. People also spend evenings or afternoons in the club cooking asado or drinking mate. This is a safe and exciting environment for teenagers who might otherwise be drinking and driving to nearby cities. My impression was that the environment at the social club is like a family. 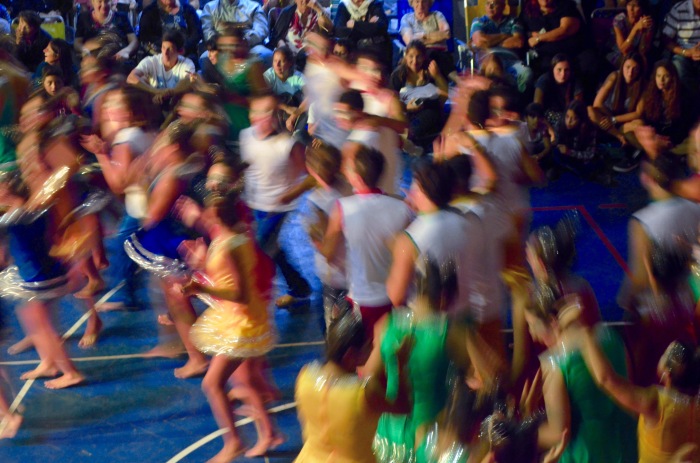 The best part of this event was that there were dogs just randomly roaming around in the gym during the performance or sleeping on the sidelines. Most of these dogs live at the club because they were abandoned by their owners and this is a place where they can get food and shelter. I was surprised at how tolerant the people were of these dogs hanging out because the event was packed!

One thought on “La Emilia Olympics”